How did you hear about TVRC?

Growing up in Jackson, TVRC has always been a visible part of the local community. Specifically, I remember attending the local Jackson Hole Roundup as an 11 year old and seeing the storied history come to life. I couldn’t wait to attend TVRC!

What’s your favorite activity to do in the valley?

It’s such a hard question! I grew up fly fishing, hiking, skiing and horseback riding here and I still love and enjoy all of these activities. However, with a young family I don’t get to do most of these to the level I did before. Right now I have been enjoying more of the simple, kid-friendly activities that our area has to offer!

Who or what inspires you?

It’s not so much any one person, but more about the inspiration I get from hearing about how others have struggled and overcome challenges that truly inspire me. There is a saying we have in Wyoming, and it’s “ Let er Buck.’’ It comes from the idea of rodeo rough stock riders getting atop the animal they drew and giving it their all while the animal does their darndest to throw them off.They know it’s going to be a tough ride from the moment the gate opens, yet they keep getting back in the saddle and trying again, even when they fall. We can extrapolate the idea and take it a step further to take a challenge head on, knowing that it’s going to throw you around and beat you up and won’t always be easy. Nonetheless, we strive to do our best, hold on and keep getting up and trying again when we get thrown off.

I bought tickets to a U2 show in Salt Lake for my wife Cora’s birthday when were were newly married. Although I have always enjoyed U2, I never thought of them as a band that I would love to see in concert; the tickets were much more about a birthday surprise. It turned out to be a fantastic weekend, where a lot of things just fell into place. I didn’t really know what to expect, but was blown away by how good the show was, the fans and the whole atmosphere. Another funny story, was back when I was a camp counselor at a camp In North Carolina, we went into Charlotte one weekend and saw a Dave Matthews Band Concert. Being a Wyoming boy, this was really the first “big” concert that I had ever been too. Incidentally, later in life Cora and I figured out that she was at the same concert although our paths didn’t cross until a few years later. So both of my concert stories somehow involve my best friend, Cora!

If you could travel anywhere in the blink of an eye where would you go?

Australia and New Zealand have always been on my list to visit!

What’s your favorite trip or activity at TVRC?

The CC pack trip or the Darwin Backpack. I have spent a lot of time in the Gros Ventre Wilderness and value the area. Darwin Peak, Chateau Lake, Ouzel Falls, and Jagg and Tipi Creeks hold a lot of experiences for me outside of TVRC. The fact that we take our campers to the same area is a very neat experience. This past summer I was on a fly fishing trip teaching kids to fish on the same exact river where I was learning to fish some 30 years ago.

What’s your favorite song to sing around the campfire?

I have spent a fair amount of time around campfires! There are a host of great campfire songs. I can’t really say that I have a favorite although “Night Rider’s Lament” and “Tumbleweed” (by Peter Rowan) have a special place in my heart. But just about anything by Marty Robbins, Ian Tyson or Chris Ledox will do!

If you could live in Jackson Hole in any era when what would you choose and why?

I always think about the old saying “I was born a 100 years too late” and I think some of that still rings true. The 1880’s in Jackson Hole would have been a rough and tough place. The Fur Trappers would have been long gone, Yellowstone would be a newly established National Park and the explorers would have gotten back from the Hayden Expedition. The 1880s was really the start of Homesteading and Ranching culture in Jackson. To be part of that or even just see how it changes and defines the community and landscape would be exciting.

What are you most looking forward to in your time at TVRC?

Continuing the legacy of TVRC and the American West. There aren’t many opportunities for people to just jump on a horse and spend 4 or 5 days in the Wilderness anymore. For young people to have that opportunity is a really special and defining moment for them. Lots of the champions for conservation, Wilderness and the protection of lands comes from those people’s experience in nature as a young person. Being a part of that, even if just a conduit is an honor and responsibility that I will always cherish. 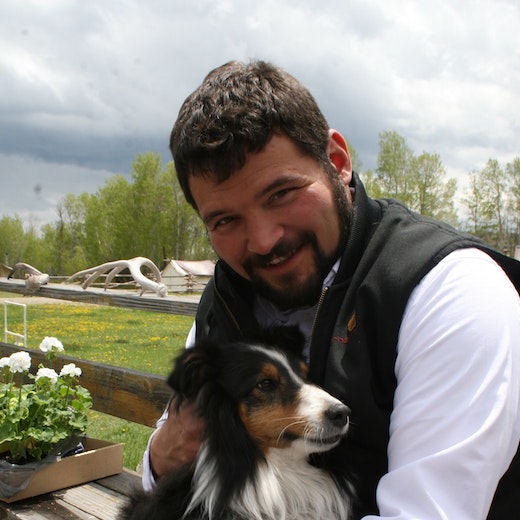 Jim, TVRC’s Camp Director is a Jackson Hole native has been working at summer camps for over 20 years. Jim brings a host of outdoor experience in western Wyoming and the Greater Yellowstone Ecosystem.