Get to Know Matthew - Our Admissions Manager

How did you hear about TVRC?

I first heard about TVRC from staff and alumni when I was living in Kelly and working as a ranger in Grand Teton National Park in the mid-1990s. I have trained some of the seasonal staff in wilderness medicine as part of my work with NOLS. I also trained field instructors and graduate students at Teton Science Schools that were former TVRC campers and staff.

What’s your favorite activity to do in the valley?

I have been lucky to have had the opportunity to explore many areas around Jackson Hole over the years on foot and on skis with family and friends. I have climbed all of the named peaks in Grand Teton National Park and swam in all of the lakes during my explorations and after all of this adventuring, I would have to say my favorite activity is climbing peaks and skiing down them in the winter.

Who or what inspires you?

I am continually inspired by wild landscapes and the authentic lessons that I have learned through my experiences exploring these places in my life. I am also inspired by people that have dedicated their lives to conserving wilderness, like Mardy Murie. Mardy and her husband Olaus Murie who lived on the Murie Ranch here in Jackson Hole with were pioneers in the wilderness conservation effort that led to the passage of the 1964 Wilderness Act. I met Mardy when I was a Park Ranger in Grand Teton National Park and she inspired me to pursue a career in outdoor education and wildlife biology. Mardy once said, “Don’t worry about what you will do next if you take one step with all the knowledge you have there is usually just enough light shining to show you the next step.”

One of my best friends from college who was the best man at my wedding introduced me to Michael Franti & Spearhead. There is an incredible amount of positive energy in some of his music and I was both surprised and uplifted during one of his live shows by the feeling of community created by his music among the audience. It had a profound impact on me during a challenging time in my life and continues to make me smile whenever I hear his music.

If you could travel anywhere in the blink of an eye where would you go?

I discovered the small seaside town of Bolinas, CA while driving up the Pacific Coast Highway during a trip to Alaska to take a job studying Wolves in Denali National Park. This place nestled in amongst the redwoods and the pacific ocean has always had a calming and restorative impact on me whenever I visit and I would definitely travel there again if I could right now.

What’s your favorite trip or activity at TVRC?

I would have to choose climbing the Grand Teton, from the first moment I saw this mountain it has inspired me to explore and climb many of the peaks in the Teton Range and there are few things as wonderful as the sunrise from the Exum Ridge. I think it is something that every camper who has the will should attempt at some point in their lives.

What’s your favorite song to sing around the campfire?

I enjoy so many of the songs but “Across the Great Divide” just resonates in my heart every time I hear it sung under the stars.

If you could live in Jackson Hole in any era when what era would you choose and why?

I would choose to live in the era of the mountain man, because I think it would be amazing to see this valley before it was developed and to travel the high country hunting and trapping and discovering the wonders of this place without any crowds of tourists. I would thrive on the challenge of exploring and surviving in the wilderness at that time and telling stories around the campfire at the rendezvous sites where the mountain men gathered.

What are you most looking forward to in your time at TVRC?

Seeing camper’s growth in self-confidence and as leaders during their summers at TVRC. 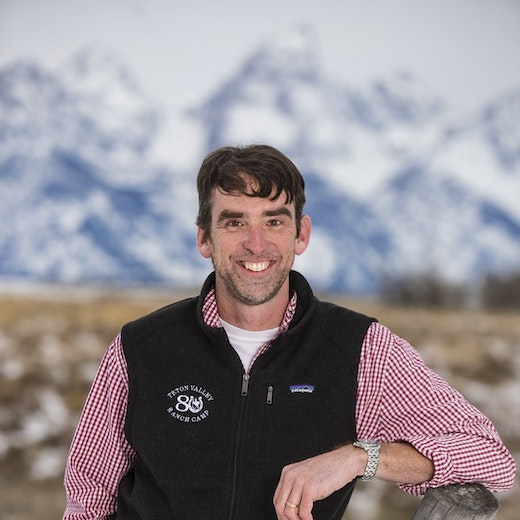 Matthew was born and raised in the foothills of the Blue Ridge Mountains in Virginia and first experienced the wonders of Wyoming on a NOLS course in the Absaroka Wilderness. He moved west and studied at the University of Montana where he earned a B.S. in Wildlife Biology.

Matthew worked as a ranger-naturalist in Grand Teton National Park, spent a year as a graduate student at the Teton Science Schools, and then earned an M.S. in Zoology from the University of Wyoming where he investigated coyote habitat use patterns in Jackson Hole, WY. He also spent a summer working with the Murie Science and Learning Center in Alaska studying wolves in Denali National Park. Upon returning to Wyoming, he earned an M.Ed. in Curriculum and Instruction from Montana State University, where he studied culturally relevant, project based learning, while teaching high school science to Northern Arapaho students on the Wind River Indian Reservation. Matthew most recently worked as an outdoor educator with K-12 students and adult learners during his time at Teton Science Schools. He also teaches wilderness medicine courses for NOLS.

Matthew is a wild lands enthusiast, mountain biker, climber and backcountry skier, and loves discovering new places to explore with family and friends. When he is not working at TVRC you will find him exploring in the mountains, reading, playing guitar, cooking or riding his motorcycle. Along with his wonderful wife, Lisa and adventurous son, Dylan he enjoys his quality of life in Jackson, where he is inspired daily by this beautiful place and the community.