A Quick Natural History Lesson of the Tetons

Shared by Whitney Oppenhuizen on September 24, 2020

If you’ve been to Jackson Hole, you’ve likely stopped and stared in awe at the beauty of the Teton Range, but do you know why they are so impressive, aside from their awe inspiring look?

The Tetons were formed through a series of geological processes that continue to shape them to this day. They began to take shape when two tectonic plates collided along the 40 mile Teton Fault, creating an area of uplift. This uplift is still shaping the mountains to this day–whenever there is an earthquake along the fault, the mountains are pushed upwards slightly. If you’ve spent any time out here you may have even felt some of the tremors we get on occasion in the valley. Most recently we had one in June of 2020. The fault is still considered active, but don’t worry too much about getting caught in a quake while you’re here, the last earthquake large enough to cause significant movement was about 5,900 years ago! In certain spots close to the base of the mountains the fault is visible, like in this photo that was taken of the base of Rockchuck Peak.

Another important player in the formation of the Tetons are glaciers. There have been multiple glaciations since the Tetons began forming 10 million years ago, but the last glacial maximum (when a majority of the earth was covered in glaciers) occurred around 20,000 years ago. During this period, glaciers covered most of Wyoming, creating wide, U-shaped valleys and gouging out depressions as they expanded and retreated. Many of these depressions are now filled with lakes–Jenny Lake, Phelps Lake and others were all formed by glaciers. A few glaciers still remain in the Tetons, although they are quickly retreating.

People have lived in this area since the glaciers began retreating about 11,000 years ago. Indigenous tribes such as the Shoshone, Bannock, Blackfoot, Crow, Flathead, Gros Ventre, Nez Perce and others came to the Tetons to hunt animals, gather plants, and collect rocks and minerals. The Shoshone people called the mountains by the name Teewinot, meaning many pinnacles. It wasn’t until French settlers moved into the region, primarily for fur trapping, that the mountains were given their modern name.

In addition to the complex geological and cultural history of the Tetons, this area is also an integral part of the Greater Yellowstone Ecosystem. Centered around Yellowstone National Park and Grand Teton National Park, this ecosystem is one of the largest intact temperate ecosystems on Earth. Depending on where you explore in the Tetons, there is a wide variety of plants and animals you may encounter. On the valley floor, you might spot bison or elk grazing in the sagebrush. Along the Snake River, you can watch osprey prey on cutthroat trout and might even see beaver, or more likely, signs of a beaver dam.

Aspen trees are common around here, and the beavers often use them for making their dams. In the lodgepole pine forests at the base of the Tetons, you might spot signs of bear or moose, or if you’re lucky (and prepared with knowledge of how to navigate interactions)or unlucky!) spot one of them for yourself. Up above the treeline, you can often spot eagles flying overhead, and you might even catch a glimpse of a marmot or some of the other alpine animals that call this area of the valley homea mountain goat climbing effortlessly up the rocky cliffs.

There is so much information to explore about the Tetons–in person and from home. If you want to learn more, explore the Grand Teton National Park website! And of course we’re always happy to answer any questions you have! We have been running many of our trips in Grand Teton National Park and the surrounding National Forests for over 80 years! Many of the trips we run at TVRC we have run for over 80 years! 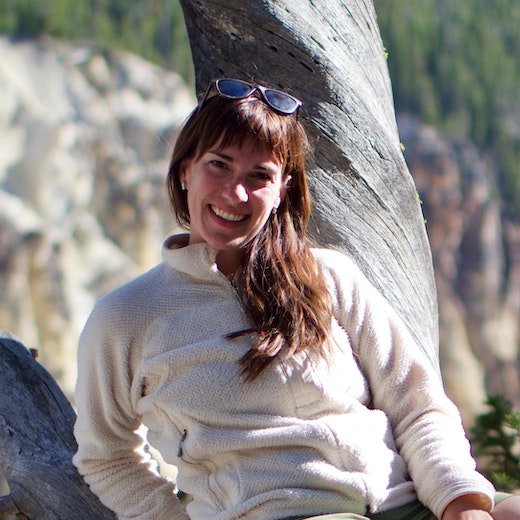 Whitney has been on the TVRC Leadership Team since 2018. Prior to coming back to TVRC Whitney spent several years working in both corporate and agency marketing focused in several industries including non-profit. Her family history with camp dates back to the 1940’s when her grandfather worked as a Wrangler under Jack Davis. She attended TVRC and returned in college to work at camp for a couple years. Whitney loves spending time outdoors horseback riding and going for hikes with her dog Jack.